Here’s a sad truth many people are facing in the job market today...

There comes a time, no one knows exactly when, when your work experience starts to work against you.

If you’ve not experienced this, you’ll have to just imagine it. You suddenly wake up to the realisation that your impressive CV is somehow harming your prospects. It’s a bitter pill to swallow because it’s hard to understand.

HOW COULD A COMPANY NOT BENEFIT FROM YOUR BREADTH OF SKILLS AND EXPERIENCE?

You might not have given this problem a passing thought – probably because it gets noticeably less attention than other type of discrimination. In fact, many people would rather pretend it doesn’t happen. But it does.

OUR KIND OF PEOPLE

The thing is, employers are likely to ask the following questions while mapping the talent they need for roles:

How will they fit in with the rest of the team? Are they innovative? Will they be in it for the long run?

But, if an employer is serious about catching unconscious bias in action, before asking those questions, it’s worth exploring each one in depth:

How can we look for people who ‘fit’ without hiring the same sort of person each time? What are we actually asking for in an innovative person? Does ‘long-term commitment’ really impact the value a person can bring?

This isn’t only a tech industry problem, of course, and that’s why we’re well aware of the work that’s underway to improve diversity and inclusion in business. That said, it does seem to be noticeably worse in tech, and age definitely doesn’t get enough attention considering the scale of the problem.

According to CW Jobs, 41% of tech sector workers said they’ve witnessed age discrimination in the workplace, compared to 27% across other UK industries. 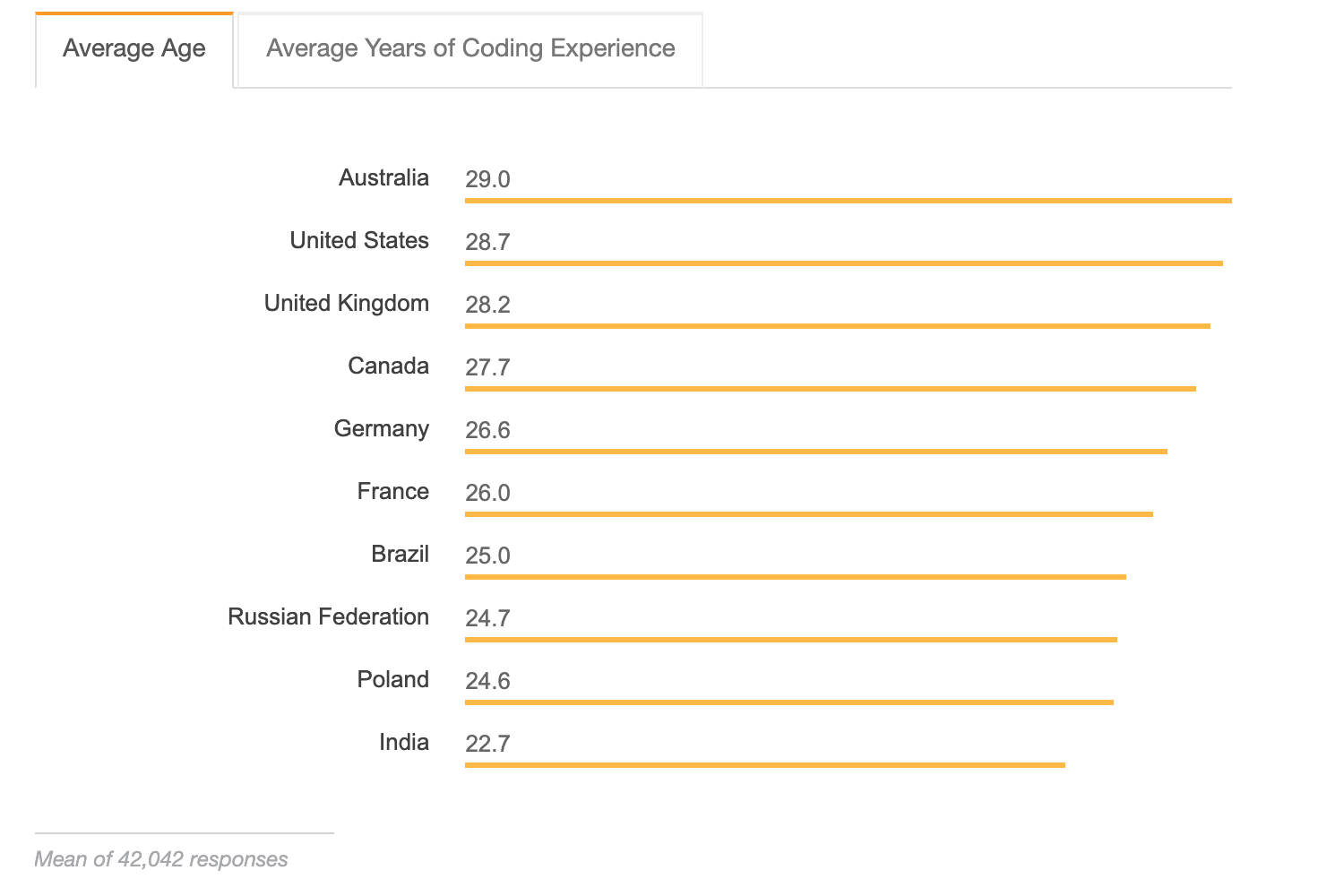 Average age by country from Stack Overflow’s 2018 worldwide developer survey (based on an average of 42,000 responses).

WHY IS AGEISM A BIGGER PROBLEM IN TECHNOLOGY?

In the tech world, things move really fast, not just for workers but consumers, too. As new platforms come online, all vying for their share of the attention economy, they nearly always cater to those who are most likely to immediately embrace them – the young. For everyone else, it can feel a bit like you’re on the outside looking in – a prime example of digital ageism. This creates a cultural divide at work between those ‘in the know’, and those who aren’t. This is a particularly lonely place to be if you’re already noticeably outnumbered by your younger colleagues.

Verbal abuse impacts older tech workers, too, but it’s often casually written off as ‘banter’. This type of harassment at work can lead to mental health and confidence issues, causing career problems later down the line.

Age discrimination in the workplace is also not an issue that only impacts scrappy start-ups. In 2007, Facebook’s Mark Zuckerberg made this ageist remark: “I want to stress the importance of being young and technical. Young people are just smarter.” 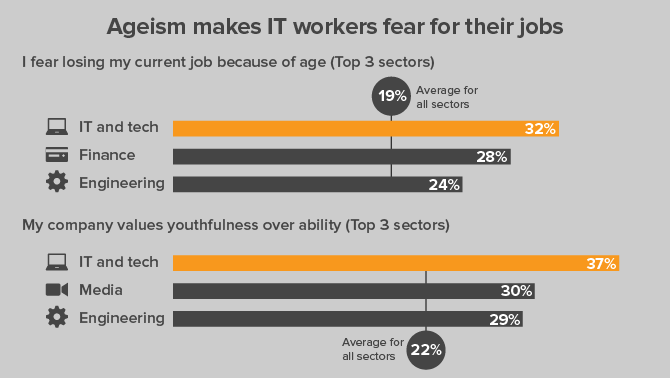 Graphic based on 2250 mostly UK workers surveyed by CW Jobs.

Money is another key consideration. You’re not going to accept a junior wage when you’ve got many years behind you and know your worth, but this conflicts with the priorities of cost-conscious companies. So, if they’re able to do so, they’ll compromise and hire those ‘hungry’ Junior Developers who are eager for a chance.

An honorary mention must go out to younger Developers here, who have their own angle on this same problem. Too often, they’re being hired with the expectation that they’ll do much more for much less money, until they’re no longer useful; or they want too much money, or they burn out, only to be replaced by the next wave of young developers. Silicon Valley wrote the book on this (and HBO made it into a TV show).

WHERE DO WE GO FROM HERE?

You can get lost in the sad rabbit hole of stories about ageism in tech (we did), and it makes for depressing reading, but, like all good holes, we can dig ourselves out. And, as we do, we’ll start to see how we’re on track to improve.

Companies have experienced  a collective ‘lightbulb moment’ over recent years, and now see the value of diverse perspectives in their workforce. We’ve learned that when we meaningfully focus on diversity and inclusion, it doesn’t just make for a better internal culture or improved PR (though both those things are nice) – it also means greater innovation, more highly engaged employees, and an enhanced bottom line.

So, if you want to feel good about what’s coming, you can be confident that when money talks, the tech industry listens.

WHAT CAN I DO TO IMPROVE MY OWN PROSPECTS?

If you think digital ageism might be impacting your career prospects, there are things you can do.

If you’ve been at the same company for many years, possibly at the mercy of their legacy systems, it’s going to make your life much harder when you try to move on – so don’t leave yourself in such a vulnerable situation. You can look in-house with your current employer, explore external courses, or combine the two. There are always options to enhance your skill set and make sure it’s relevant to today’s market.

You might really enjoy being a Developer, but hear us out. There are other options that could really suit this point in your career. Project roles, CTO, academic work, consulting, and so much more. Managing people isn’t for everyone, but it may be for you. However your ideal path looks, your technical skill set is hugely attractive for senior appointments – and they’re more varied than you might think.

REFLECT ON ALL YOU’VE LEARNED

When you’ve been doing the same thing for a long time, it’s easy to forget how much you’ve picked up along the way. So, take the time out to notice. By now, you can find creative and innovative solutions to problems, you’ll have collaboration skills, analytical skills, and way-above-average focus and concentration. You can code, work with data structures and algorithms, and organise data to solve real-life problems. Companies need what you bring to the table, and will recognise this – but only if you give yourself due credit.

So, as you can see, it’s not all doom and gloom. Have you got a story about overcoming the odds and reinventing yourself later in your career? We’d love to hear it!

If you’re interested in refreshing your tech skills? You might want to join one of our informational webinars on how to take the leap into tech, or join one of our coding taster sessions.

Launch a future-proof career. Discover how you could learn to code, and transform your career by joining a _nology Software Developer Course.

Originally established by the American Library Association and Young Adult Library Services Association in 2007, this week-long initiative aims to...

How did the business start? At Opus Talent Solutions, we had been working in digital and tech recruitment for 10+ years and kept coming up against the same...